Isn’t there a small number of people who have heard of the place name Akaoka itself? Akaoka is a small town in Konan City, Kochi Prefecture. It is a town that is usually not easy to find (about 30 minutes east of Kochi by car), but there are big events twice a year where people from all over the world come together.

Mr. Ebizo Ichikawa, Mr. Sakura who glutted you tuber, Mr. Tsurube also had quite a lot of apts. This time, we will introduce the big event twice a year. The Dorome Festival is a festival to pray for the good harvest and safety of sardine fry (Chirimenjako raw), which is held every year in Akaoka (southeast of Kochi Station, about 30 minutes by car) at the beginning of April GW in April .

There are many food stalls on the shores of Akaoka, the venue of the event, and there are many menus that are suitable for the “Dorome Festival”, such as “Dorome”, “Dorome Juice” and “Crimen Jaco”, in addition to the standard menus such as Okonomiyaki and Yakisoba. (Although it seems to be almost frozen because it is prepared in large quantities) ●A lot of crepe jam(Chirimenjyako) 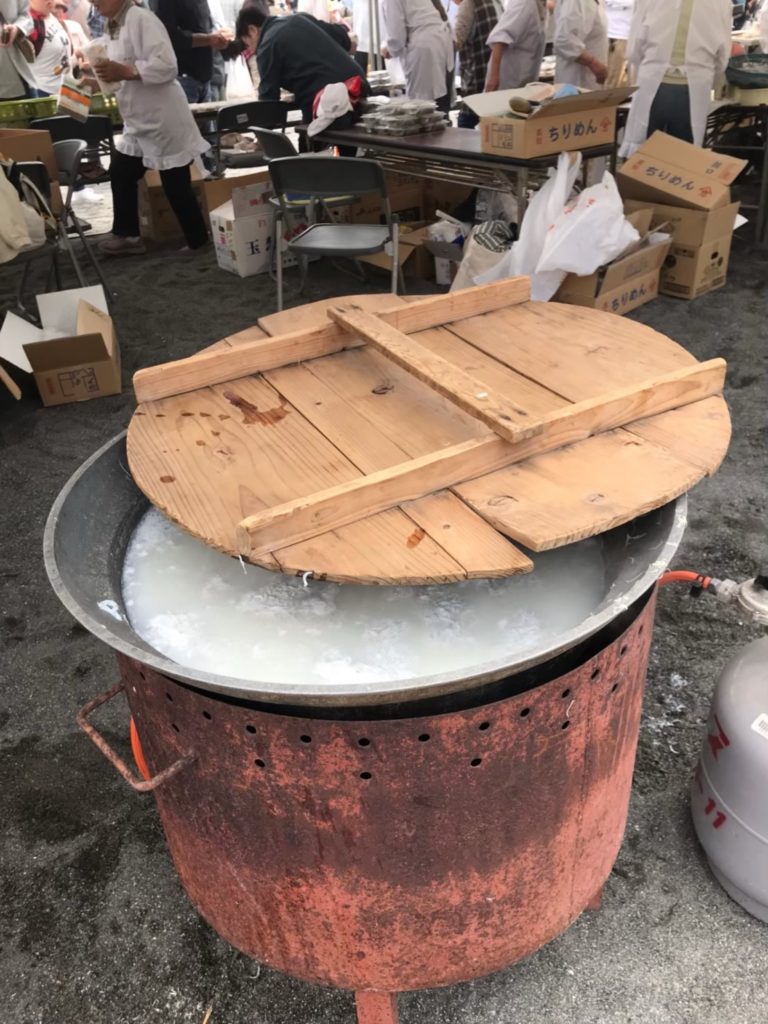 Festival stuffs set up the main stage on the sandy beach of the coast, spread the goza(Sheet for sittng) and vinyl sheets around it, and enjoy the event, but if you pay for it, you can also enjoy the festival a little richer. There is a tent seat where you can see the main stage well, and you can sit in the tent seat if you pay 2980 yen.

Sake 2 go(360ml) and dorome soup are included so you don’t feel expensive. When the whole festival is blurred, it looks like a festive festival everywhere, but the main event is that the “Dorome Festival” is “super fun”. ② The bowl is a flat cup.

③ If you can not drink within 40 seconds, give up. 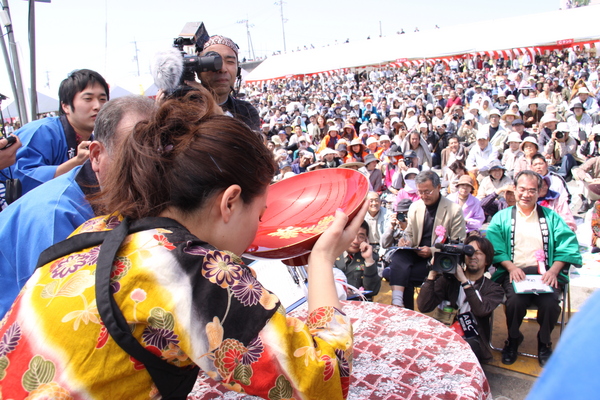 In the meantime, while you are drinking, you will be inspired with full power on the stage with the feeling that “Go, go, gut, suck, and the second half, do your best! I thought there is no time to take a break drinking seriously. In 2019, the fastest for men was 14 seconds 13 and the fastest for women was 8 seconds 66. Well, it’s a funny time.

If you think that you can drink a 1.5L plastic bottle within 14 seconds, it’s impossible game. In 2019, Sakura Kisaragi, a famous gluttony youtuber, also participated in the competition, and in the 9 seconds range, sake 5 go she was drinking. Even after drinking out, it was still fine, so it seems to be a strong drink, envy. If you are confident in the speed of drinking, please join it!

Although the capacity is 25 people, it seems that the capacity will not be surprisingly probably because the drinking amount is a crazy level, so there is a chance! You can drink Tosazuru(kind of sake) 1 sho or 5 go for free! You can drink too much and fall! There is a doctor and an ambulance resident (It’s Nori in Showa, but it’s serious) Ekin festival is a festival held in a town called Akaoka in Konan City, Kochi Prefecture. The history of the picture gold festival is short, and the first festival was held in 1977. Originally in the area of ​​Akaoka, a crazy festival was held according to the modern sake situation called Dorome Festival (it is still being done), but the youth club at that time from the Akaoka residents’ association, The picture gold festival began when asked to hold the next event.

That is, the shells are baked and crushed and powdered. The ingredients of the shell shine because the candle flame shines. In addition, the solution that dissolves paint containing pigments using shells is also unique. Normally, it dissolves in water, but picture gold can be used for a long time and discoloration can be prevented by dissolving the paint with a solution containing glue. The raw material for glue is marine products such as fish skin and bones, and the shells contained in pigments are also marine products. These paintings are also characterized by theatrical style. They are open to the public at the Akaoka Eikin Festival, and can also be seen in the store where the Ekin is stored. Ekin Warehouse is 500 yen entrance fee and open until 20:00. In addition, there is an event in Kabuki that expresses the play written in the picture of the picture in Kabuki, and it is held on the stage of Kabuki called Bentenza, and Ebizo Ichikawa has also been on the stage in the past. You can watch Kabuki for free during the Egin Festival, but when you were at Ebizo Ichikawa’s stage, it seemed amazing to see a long line. I couldn’t go at that time, but it is a very beautiful stage.

Kabuki at the Ekin Festival is a two-part system from 17:00 to 18:00 in the evening and from 18:00 to 19:00. It’s an event that attracts many visitors from abroad, and even if you’re Japanese, it’s interesting to see Kabuki because it’s not so likely. In addition to Ekin Warehouse and Bentenza, there are plenty of other elements to enjoy the festival, such as volunteers in the Akaoka shopping street opening the streets and holding beer gardens. Please go by all means once!

From Kochi Station, the JR line runs to Akaoka (Akaoka), which can be reached in about 30 minutes. Because you can go without transferring, even people who are not familiar with Kochi’s geography can easily access it.